This 2013 study shows that injections of TREE-äge applied in late summer or early fall will provide adequate levels of tree protection the following summer. Download

FIND A TREECARE
SERVICE PROVIDER NEAR YOU 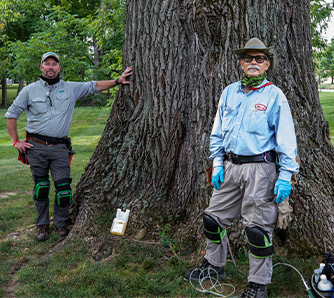 "I’ve been injecting a 70“ ash tree on the campus of Miami University since 2014. It has typically taken three long mornings to coax the needed volume of TREE-äge® into this tree. Using R10 for the first time, the entire treatment for 2020 was completed in 2.5 hours, in mid-August! R10 is revolutionary for my business - reading about R10 is one thing, an experience such as this quite another. I’ve instantly become a convert.”